We really enjoy watching live theatre, but tickets can be expensive.  We probably watch more shows in a year than the average patron, and have employed the following ways to minimize this expense.

We tend to buy tickets in the lower price range rather than going for the best seats in the house.  We don't mind sitting further back, opting to see many shows from afar rather than a few shows up close.  However we are mindful of sight-lines.  We have learned that we usually prefer seats further back and closer to the centre, rather than way off to the side, or even up too close, where our view is obstructed from part of the stage.  It helps to be familiar with the seating configuration of the major theatres and understand the implications of various locations.  We once watched a play from the centre of the first row of the Bluma Appel theatre, and found ourselves so close to the stage that we were craning our necks to see the actors and had a clearer than desirable view of their nostrils. 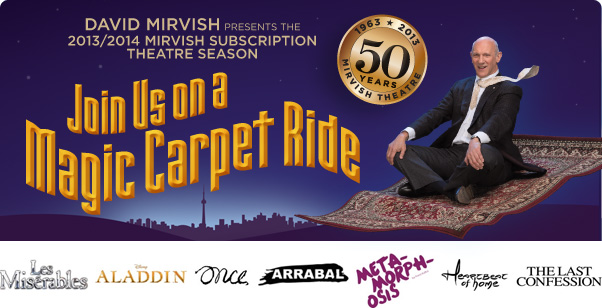 Subscriptions to a series of plays often offer a healthy discount over purchasing tickets separately for individual shows.  I have held my Mirvish seasons tickets for over two decades and have received as much as 40-60% off the base prices.  We were watching up to 7 shows for the price of separately buying tickets to 2 or 3 of them. Following our strategy of seeing more for less, our subscription falls in the lowest price range, although I've had this subscription for so long that I now hold some of the best seats within this section.  For the 2012-13 season, we paid $179 for 6 musicals (love musicals!!).  So I'll be watching The Book of Mormon for under $30.  The Mirvish subscription is one of the most flexible as it allows free ticket exchanges up to 48 hours before the show. 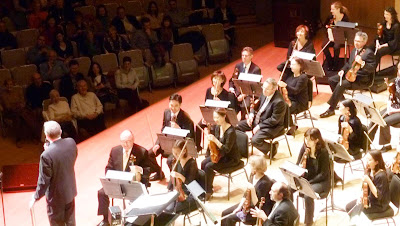 Now that we are retired, we are much more flexible as to when we can attend shows.  Often, matinee performances are offered at a lower rate, especially those held during weekdays.  We recently watched a Tuesday afternoon performance of the Toronto Symphony Orchestra Plays James Bond for $29 per seat.  This option was not available for the same show later that evening.  You need to be careful trying this with longer running shows, because often the matinee performance will feature the understudy as opposed to the star.  Some shows offer preview performances at a lower price.  You get a discount for agreeing to see a show before hearing the reviews. The Stratford Festival usually has a preview session for their shows early in the season.

One great tip I've discovered is that you can sometimes save most or all the online or over the phone service charges and extra fees by purchasing your tickets in person directly from box office, as opposed to paying for the convenience of buying online or over the phone.  I have had savings of over $20 for two tickets by going this route.

If you are willing to wait for a sale and possibly miss watching a show, there are many opportunities to score cheaper tickets.  Some theatres such as Mirvish offer same-day, limited "rush seats" or promote ticket deals towards the end of a show's run.  Group discount websites like Groupon or TeamBuy occasionally offer up theatre deals, especially for smaller or less popular shows that need the attendance boost.

The shows at smaller venues like the Factory Theatre, Tarragon, Lower Ossington, Hart House Theatre, etc. are usually offered at a much lower price and sometimes even have a "Pay What You Can" day.  I often prefer the lesser known, more intimate shows over the big blockbusters that are sometimes overhyped.  One of my favourite shows from a few years back was "Ride the Cyclone", performed at the Theatre Passe Mureille.  I enjoyed this smart, dark comedy of a musical as much as I did watching War Horse and much more than The Wizard of Oz.

Once a year in July, we go for really small, sometimes experimental works by attending the Toronto Fringe Festival.  For a 12 day span, you can watch 45-90 minute performances for $10-$12, in all sorts of venues ranging from small theatres to wacky locations like a bar, a bra shop or a traveling bus.  You take your chances and often get what you pay for.  But every once in a while, a gem such as The Drowsy Chaperone or Kim's Convenience shows up at Fringe, becomes the theatre darling of the year and gets picked up by mainstream theatres for a professional run.
Posted by A.R. English at 12:08 PM