Air Canada announced recently that it would start charging $25 per flight for each checked bag.  This adds a $50 surcharge to the price of a return airplane ticket that is already heavily laden with taxes.  While the additional cost is bad enough, what adds insult to injury is that there is no guarantee that your bag will actually reach its intended destination.

This happened to us on our recent flight home from Calgary to Toronto with a layover in Ottawa.  Somehow, our suitcase was permanently lost (or stolen?) en route.  It has taken almost 3 months for us to get financial compensation, which Air Canada caps at $1500 regardless of the value of the items lost.

Upon arriving at Pearson airport, we waited in vain for our bag to come off the baggage carousel.  Once it was clear that our suitcase was not on our flight, nor the flight after, we started the lengthy process of searching for and then claiming compensation for the lost bag.  Here is what we went through and our lessons learned:

1. Before leaving the airport, we reported our lost bag at the baggage claim counter and created an incident record.  We had to present our baggage claim ticket (that is usually attached to your boarding pass-do not lose this!) and gave details about the type, size, brand and colour of our suitcase as well as sample contents inside.  We were assigned a baggage tracing file reference number and told to go home and await delivery of our bag.  If it did not show up after 5 days, then we could move to the next step.  During those 5 days, we could check on the status of the bags on Air Canada's Worldwide Baggage Tracer website.

2. After 5 days and within 21 days, we had to download and fill in a Baggage Declaration form, which then had to be snail-mailed to the Baggage Claims Department in Quebec.  The requested information included:

Luckily as part of planning our travel, I usually make a "packing list" of what I want to bring on the trip, to make sure I don't forget anything.  This list made it easy to fill in the itemized contents form.  Unfortunately the total value of our baggage contents exceeded Air Canada's $1500 liability limit by far, since we had been traveling for a wedding followed by vacation and had lost both our dressy and casual clothes.  We did still have the option to claim the rest with our home/property insurance (more on this later).  The form asked for receipts and details about size, colour, brand, manufacturer, where and when the items were purchased, and the original purchase price.  Who would keep all this information about their clothes after buying them?!?  We did not have all these details but filled out the form the best that we could.  We did have a photograph of our suitcase and its distinctive striped strap, so we sent that along to help with the search.


3. We mailed our form exactly 5 days after the loss of our luggage and then waited and waited.  What made it particularly frustrating was the difficulty of finding anyone to talk to who could set our expectations of what were the next steps involved and how long the process would take.  We checked the WorldTracer website regularly but there was no status update other than the original message "We are trying to locate your bag.  Please check again later".  We periodically called the 1-888 number of the Central Baggage Customer Care Centre but were connected with remote offsite call centre operators who did nothing more than look up the status, probably on the same website that we were checking, and report back that "the search continues".

About a week and a half after submitting our claim form, the status on the website changed to indicate that our claim had been received and was being processed.  Again, we had no clue how long this would take and went back to waiting.  About another 3 weeks after the change in status, we finally connected with a call centre operator who seemed to have a bit more information.  He was able to look up the date that our claim was officially "accepted" into their system, and informed us that there would be a 50 day "tracking" period starting from that date, during which they would intensify the search for our bag.  Finally, some one gave us a useful time frame to help set our expectations.  There was no point calling again until after the 50 days were up.

4. We phoned again at the end of the 50 day search period, and explained that the time was up. After some pressure on our part, the operator agreed to forward our file to the Claims department for settlement.  Again there was no indication of how long this would take and no way to contact the Claims department directly other than mailing them a written letter or sending a fax.  Our attempts to get a contact email or phone number for the Claims department were rebuffed.

5. Without any further guidance, we settled in for another long wait.  Imagine our surprise when a mere two weeks later, we received our $1500 claim settlement cheque in the mail, along with a letter indicating that they were unable to locate our bag (which we had realized months ago).  In total, it took 81 days for Air Canada to resolve our issue and compensate us for our loss.

6. Our next step was to file a "Theft, Burglary or Robbery - Off Premises" claim for the balance of our loss against our home/property insurance with Aviva.  We were expecting to have a $1000 deductible but were pleasantly surprised to learn that our policy had a disappearing deductible of 20% per claim-free year.  Since we had been claim-free for over 5 years, we now had a zero deductible.  We were required to fill out another itemization of the contents of our suitcase but were able to cut and paste from the Air Canada list for the most part.

In comparison to the Air Canada experience, the one with Aviva was extremely smooth, quick and stress free.  After submitting our claim, it took merely a week for it to be processed.  We had the choice of taking the settlement as "replacement value", meaning we would replace all the items and send Aviva the receipts which they would reimburse, or take a lesser cash settlement that reduced the value of each item by a depreciation percentage ranging from 10 up to 70%!  The total cash value came to about 60% of the replacement value.  When it became obvious that I was leaning towards the cash settlement, which would give us a quicker resolution with much less hassle, the adjuster voluntarily offered to raise the amount so that we would receive 70% of our replacement value.  We happily accepted and this cheque is now in the mail.  Our property insurance disappearing deductible has been reset to $1000, but with any luck, we will not need to make another claim again until it has reverted to zero.

While we always knew that our luggage could be delayed, it never fully registered with us that it could be totally and irretrievably lost.  Being financially reimbursed cannot completely make up for the loss of some beloved items that have sentimental value and which were purchased long enough ago that they could no longer be replaced.  This has been quite the traumatic experience and I've learned some valuable lessons for the future.

Traditionally I have been a chronic "over-packer", since I like to be ready for all eventualities and I want to have my favourite clothes and accessories with me while on vacation.  This ordeal has cured me of this.  In the future, I plan to pack sparsely and only with items that I would not be devastated to lose or which I can easily replace.  Some pricey items that I mindlessly checked but that I will make sure that I carry-on in the future include my custom-made dental night guard and my electric toothbrush.  In fact, as much as I can, I will try to avoid checked luggage.  I will strategically pack as much as I can in my carry-on baggage, although the new $25 check-in fee has resulted in a crackdown on carry-on bag size and weight limitations. 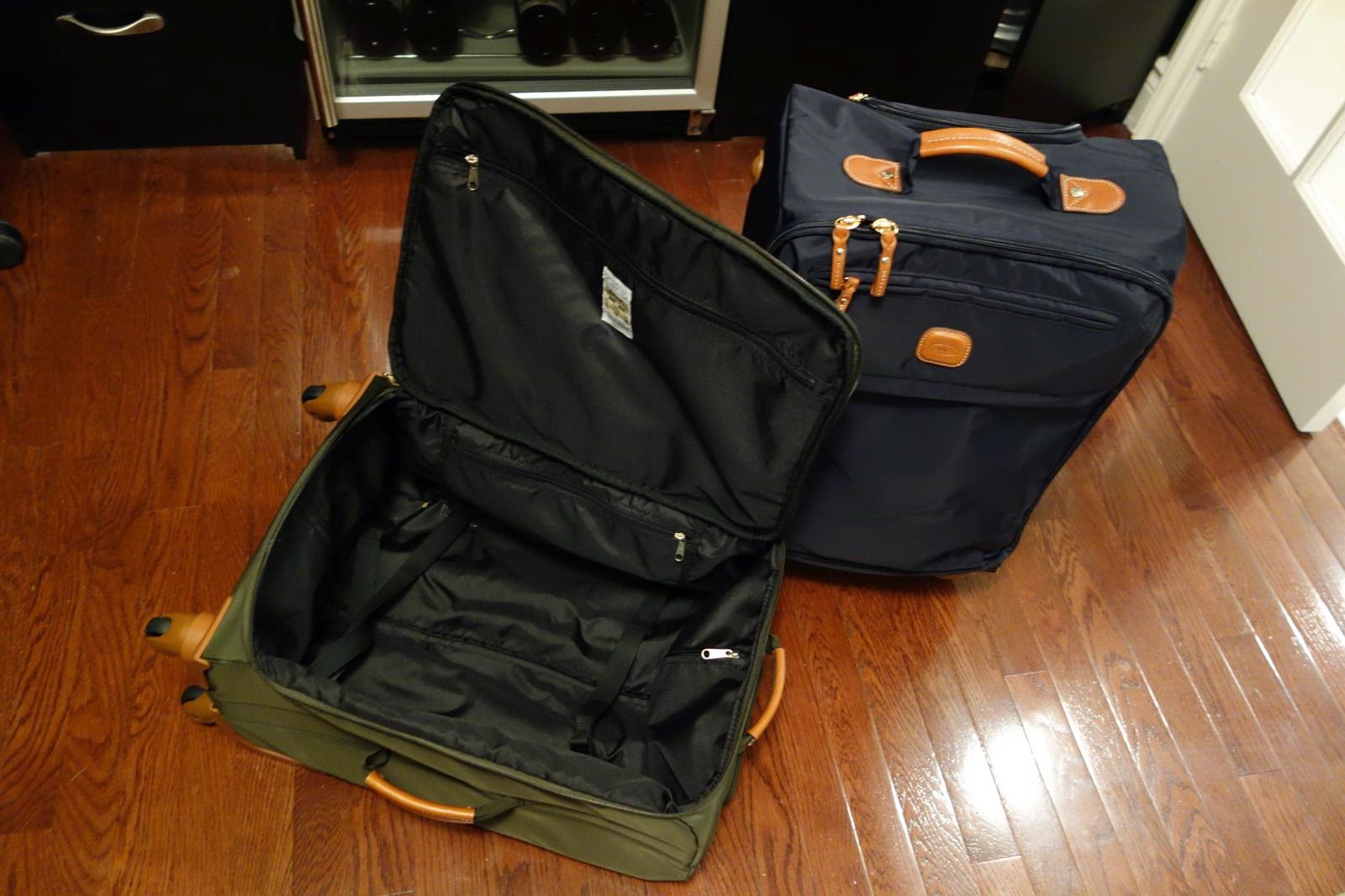 With our settlement money, we decided not to buy another full-sized replacement suitcase.  Instead, we researched the purchase of a pair of better carry-on cases that meet most airlines' size and weight restrictions, while maximizing storage capability and minimizing weight of the actual bag.  What we settled on was the Bric's X-Bag 21-Inch Carry-On Spinner Trolley which is made of sturdy but flexible, light-weight material that is 21"x15"x9" and weighs under 3kg.  It was recommended to us while we were browsing in the high-end Taschen! luggage store in Yorkville (162 Cumberland Ave.)  Thinking that we could get a better price elsewhere, we did a quick online price comparison and were surprised to learn that Taschen!'s price ($209) was better than other stores including Bed, Bath and Beyond ($229).

Most likely, our bag was lost during the layover in Ottawa, possibly because it did not properly check through to Toronto, as intended.  I have visions of it sitting on the baggage carousel in Ottawa until someone finally decided to take it.  We had this awkward flight because we used Areoplan points to book our flight.  In the future, we will think twice before agreeing to a layover and would rather pay more for a direct flight.  It's actually concerning how little security there is around baggage claim areas and how easy it could be for someone to walk off with your luggage before it gets to you on the carousel.  There is no security check to ensure that the luggage you leave with actually belongs to you.  At least at Toronto Pearson, the baggage area is restricted and only valid passengers can access it.  When we landed in Calgary, the baggage area was out in the open and anyone off the streets could walk up to take the suitcases.

We now have a CIBC Visa Infinite credit card that provides additional travel insurance coverage including delayed or lost/stolen baggage.  Too bad we did not get this card until after we had paid for the Calgary flight.  We were lamenting this unfortunate timing, but after reading the policy details on this credit card coverage, it turns out that we did not miss out on that much after all.  The coverage is only for a maximum of $500 per person (not sure if that actually means per bag, since we had two people's clothing in one bag) and is only in "excess to all other insurance or indemnity available to the insured."  Possibly if we didn't have a zero deductible, then the card coverage could have paid for that. I hope we never go through this again and don't ever have the need to find out whether this assumption is true or not.

I wish there was a way to inform Air Canada that despite such adverse circumstances, customer satisfaction would be much improved  if only they would set better expectations up front as to how long things would take.  But since the chance of finding anyone in the position to listen and take action is about nil, its just not worth the effort.  The uncertainty and lack of an escalation path to seek clarity was the second source of our frustrations.

Coming back to the issue of charging $25 for each checked bag–Air Canada, I would gladly pay this fee if you can guarantee that you never lose my luggage again.
Posted by A.R. English at 8:51 PM